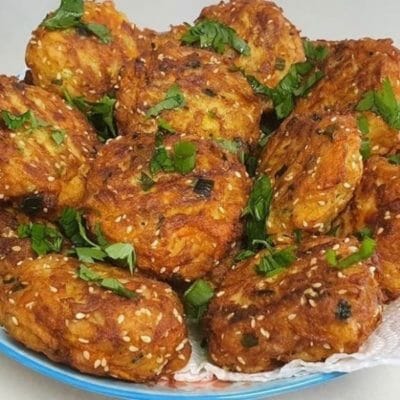 Although they look like hash browns, they are not. Latkes are also known as potato pancakes. They are traditionally served alongside brisket and sour cream or apple sauce on the first night of Hanukkah. They also make for a great side dish.

These are the most amazing crispy potato and carrot latkes recipe that you will ever make. They have maddening crispiness with perfect flavor. They are crispy on the outside and soft on the inside. Their delicious outer shell perfectly combines the flavors of the various ingredients and spices.

This recipe is a must-try! It steals the show on the dinner table every single time. It will make your day, evening, or your Hanukkah eve. It is an absolute delicacy that you will not want to stop making.

Why this Crispy Potato and carrot latkes Recipe is A MUST-try:

“I’ve been preparing them for years and also add zucchini and coriander. It comes out delicious, and the grandchildren are crazy; they eat straight when it’s hot. Best of luck to all of you.”

Should some liquid come out of the latke mixture?

No, it shouldn’t, but don’t worry if it does! Just add some breadcrumbs to your mixture or reduce the amount of liquid you use.

What can I add instead of eggs?

If you do not have eggs on hand or are vegan, you can use potato flour, cornflour, soy powder, or chickpea flour instead. Mix the flour with some water to make a sticky paste. It has the same binding effect that eggs would have. Other suitable egg substitutes include apple puree, agar, banana, and chia seeds.

DID YOU MAKE THIS RECIPE?We’d love to know how it turned out! Please let us know by leaving a review below. Or snap a photo and share it on Instagram; be sure to tag us @sharethecook

your time to shine

Want a chance to feature on our site? comment down below or send us your pictures @sharethecook

“Thanks for the recipe and the clear explanation”

“Thank you, Noam. I always make these fritters successful I add sesame flour; it absorbs the liquids. I really like sesame also.”

Oh, and we almost forgot!

This carrot potato latkes recipe is a part of our Sides Series, Click NOW for more fun ideas you don’t wanna miss!